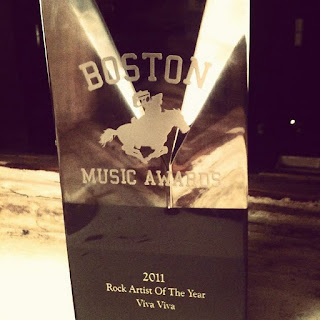 A big THANK YOU to everyone that voted Viva Viva the 2011 Boston Music Awards, Rock Artist of the Year!

We were excited to perform, so whether we won an award or not wasn't going to effect us having a good time. We lost the Live Artist of the Year award to the Dropkick Murphy's, which was all but a given. For Rock Artist, we were up against some great bands and friends - Dirty Dishes, DOM, MMOSS, and Township - so we certainly didn't think we were taking that one. But everything has been coming up Viva Viva lately, and that was certainly the case last nite! We toasted a few drinks, threw around some high-fives, and were grateful for everyone that stopped and congratulated us. It took a little bit for it to settle in though - it's a great honor.

Our set in the main Liberty Ballroom was a blast! The room was packed, and we were introduced by our main homedood Perry from Allston Pudding - who later took home the BMA's Best Music Blog! Immediately after, we ran around the entire hotel, catching some performances, hitting the bars and doing interviews with WZLX's Anngelle Wood for her Louder Now Boston video blog and Boston Phoenix/WFNX's Michael Marotta for his Boston Accents LIVE broadcast from a hotel room, 15 floors above the party!


It was a great nite all around, and we got to see a lot of friends and make some new ones! The production team that put on the Boston Music Awards did an amazing job this year! The party seemed even bigger than last year, and thanks to some changes with stage placement and stairway access, you could bounce around to each of the floors easily. The Cool Ranch room with the Bodega Sluts was a blast! They tore that room up, much like they did at Radio, Friday nite, when we shared a bill for our Boston Music Awards warm up show. There were movie stars walking around - well, at least one - with Towne gangsta, Slain, showing up to take home his Hip-Hop Artist of the Year trophy. Shea Rose and Razormaze also put on great performances. The Boston Music Awards show truly is one of the best shows of the year, because you get to see all of the best acts this incredible city has to offer from rock to pop to punk to R&B to metal - hell, there was even a marching band! 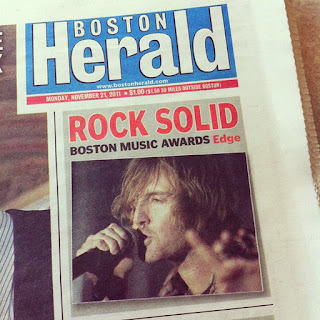 Read more about the awards shows, in this great piece, Viva Viva's Night, in the Boston Herald. You can find it at your local newsstand. It's the one with Dave's picture on the cover! The online version of the story has a video clip of one of our new songs, Human Chameleon. Herald writer Jed Gottlieb can be forgiven for not giving us the nod in his BMA's preview article, there weren't any that did. He more than makes up for it though, with this glowing review.

For those that made it to any of our shows this weekend - at Radio, King Killer Studios, Boston Music Awards - we hope that you got a copy of our Hailing A Cab In Hell/Dead In Your Tracks promo CD. With everything going on this week, we wanted to do something special for you guys that come out to all of our shows. We gave out over 200 of those promos this weekend, but we might have a few kicking around still. This weekend we secretly stashed a few in the last remaining copies of FILTER magazine at the Harvard Sq. Newbury Comics. We might stash a few more around town, so keep an eye on facebook and twitter for updates. We'd also like thank Fort Point Recordings and Repeat Press for all the hard work they did to make those CDs happen!

It was an amazing week and we'll be riding this high for a while. This week we'll spend with family and friends, giving thanks, then the week after, on Thursday Dec 1, we have the Pretty Things' 3rd Birthday Party at Precinct, in Union Sq. Somerville. We hope you'll come out for that! It will be our last show of the year. Then, after the holidays, and the calendar turns to 2012, we'll break out of the gates with a fury of new songs, and shows! Fort Point Recordings will be releasing our new 12" vinyl EP, What's The Kim Deal?, on January 24, 2012, so look for that at your favorite local record store! Until then, here is a preview of our first single, Hailing A Cab In Hell, from that EP - hope you enjoy! 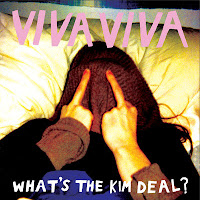 Hailing A Cab In Hell by fortpointrecordings

UPDATE: More and more reviews of the Boston Music Awards have been rolling in, and we'll added them here as we find them.

WGBH News' Edgar B. Herwick III was at the BMA's and stopped into the studio during the morning broadcast to give report, which included a live clip of our performance!
Posted by ART SEX DEATH AND TIME at 2:08 PM